It was 1979 and a smart business idea called cabinet refacing had captured Jost Fleck’s imagination. “Joe,” as he preferred to be called, recognized it as a smart way for homeowners to have a new kitchen that might otherwise have been beyond their budget. Instead of tearing out the whole kitchen, sturdy cabinets could be covered. He realized, though, that consumers might worry that was only a temporary solution, so he devised a method for cabinet refacing that was so reliable and permanent he backed it with a Lifetime of Home Ownership Warranty.

His wife Reine and their three daughters, Cindy, Renate and Lotte, helped him open a tiny, low-budget basement office in Allentown, Pennsylvania that he nicknamed the “Mole Hole.” They soon discovered the subterranean headquarters to be so flood prone that any heavy rain would have furniture floating around the room. Despite such setbacks, Joe wagered everything the family had on the chance that his full-page newspaper ad would make the phones ring.

He made his first sales on the power of his enthusiasm alone. And as he worked from his second-hand desk (yes, we still have that old desk), Joe co-coordinated the installations of the very first Kitchen Magic kitchens. Believing that customer referrals and testimonials would be better than any advertising he could pay for, he promised and delivered stellar results.

So began the Kitchen Magic tradition of over-delivering on promises, and the story of hard work and passion that overcame the darkness of a ‘Mole Hole’ for the light of success.

LeafFilter Gutter Protection; Promotional display booth. No sales will be made at the event 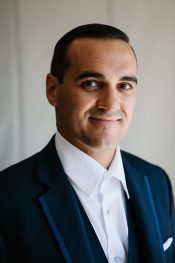 MASS Architect is a small architectural practice providing all phases of service from schematic design to construction administration, helping home owners and contractors develop architectural drawings needed for construction estimating and building permits. Nicholas Paolucci welcomes any projects throughout Massachusetts and Rhode Island, ranging from residential or light commercial use, and having small or large budgets. MASS Architect’s architectural design responds uniquely to the complexities of individual client goals and uses. Starting with thorough research, the design process strives to reveal how a building can achieve the highest function for its users as well as contribute in a positive way to the surrounding community. We embrace every new endeavor as an opportunity to challenge the imagination and explore innovation.

Nectar of the Vine is a family owned & operated business which has been in business now for about 14 years with our famous gourmet wine slushy mixes. We started out with our original 3 flavors & we now have come up with over 23 flavors which includes our seasonal flavors and our warm cocktail mixes for the crock pot. We would love to see you so please stop by our booth for your FREE wine slushy sample!

Nescor is a home remodeling company that services most of the Northeast. We are not general contractors, we specialize in what we know and do best. Since our beginnings back in 1957, Nescor has taken pride in our products, staff and service to have met and often exceeded our New England customers’ expectations. Windows, Roofing, Doors, Gutter systems, and insulation; from start to finish, we know you will be impressed with our exceptional level of professionalism and customer service. Our staff is 100% committed to our customers’ needs.